The finance ministry expects consolidated budget revenues to rise slightly faster than inflation in coming years, even if oil & gas revenues are seen to decline under a cautious assumption about the oil price (Urals crude price of 42–44 dollars a barrel). Other revenue streams should be boosted to brisk growth by the GDP growth forecast above 2 % per year and the expected expansion of the tax base by exposing a larger part of the shadow economy to taxation.

VAT revenues will contribute significantly to growth in other revenues based on the forecasted GDP growth and wider tax base estimate. Higher VAT revenues should be supported also by robust growth in imports and expected depreciation of the ruble (about 8 % against the dollar) mostly next year.

As Russia’s leaders have promised, a general increase in the tax burden of firms not operating in the oil & gas sector is not planned, although certain taxes and payments are to be increased. The finance ministry estimates that the proposed tax hikes will boost budget revenues over the coming years by an amount accounting to over 2 % of total budget revenues or nearly 1 % of GDP.

A significant revenue boost should come from an increase in the dividend requirement of large state-owned enterprises to pay out 5o % of profits. The government has negotiated with state-owned enterprises on this issue already for few years. Higher excise taxes on e.g. tobacco, alcohol and fuels should also produce a moderate increase in budget revenues. In addition, a hefty hike in health insurance payments is planned for next year.

Another way to boost revenues that has been brought up is cutting tax breaks. However, it is extremely difficult to scrap previously granted breaks, especially as some of them are permanent. The finance ministry estimates that the losses from tax breaks correspond to over 8 % of public sector revenues in 2014–20. 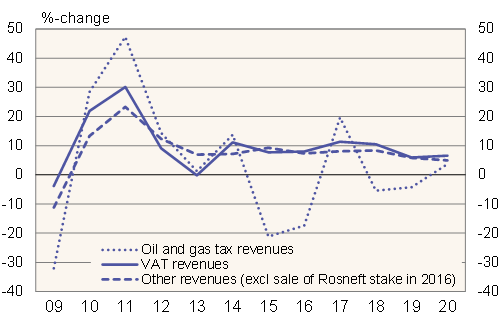