China’s National Bureau of Statistics reports that third-quarter real GDP growth was 6.8 %, barely changed from 6.9 % in the first half. Prices this year have risen faster than in previous years; nominal GDP was up over 11 % in the first nine months of 2017. China’s very consistent GDP growth figures fail to capture business cycle fluctuations, and therefore their evaluation requires alternative indicators.

Urban areas report monthly fixed asset investment (FAI), which real growth turned negative in August-September. The 12-month growth figure has been only around 2 % for the year to date. Private investment showed practically no real on-year growth in January-September. The rate of growth of public investment has slowed and this year has been around 5 %. Despite this, the national accounts show investment growth remained relatively high, and investment accounted for a third of economic growth in the first nine months.

Real growth in retail sales remained at 9 % in September, supported by the strong earnings growth. The NBS reports that real disposable incomes grew by nearly 8 % in January-September. The national accounts show that the contributions of private and public consumption to economic growth in January-September was 4.5 percentage points. The NBS says that per capita consumption expenditure grew by 6 % y-o-y in real terms. Online goods sales have grown this year at a rate of nearly 30 % y-o-y. In January-September, 16 % of NBS registered goods trade was conducted online. Online sales of services grew even faster. 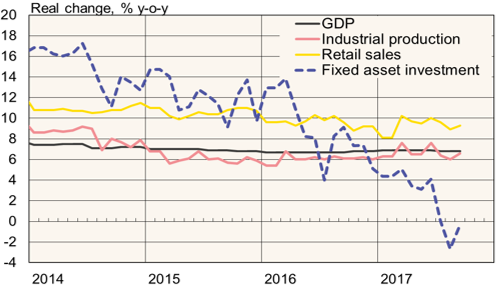