The currencies of countries in the Commonwealth of Independent States have had to endure severe devaluation pressures, due e.g. to the conflict in Ukraine, sliding oil prices and Russian economic problems that feed through to other CIS economies. This has forced many CIS countries to loosen their currency-steering approaches.

Under the IMF classification, CIS countries with de facto floating exchange rate regimes include Armenia, Georgia, Kazakhstan, Moldova, Russia and Ukraine. Russia is the only one classed as having a free-floating exchange rate (the CBR has refrained from any forex market interventions since summer 2015). The central banks of the other countries occasionally intervene to e.g. mitigate high exchange rate volatility, but do not target a specific exchange rate and they publish information about their interventions. In early September, Uzbekistan also allowed its currency, the som, to float.

The currencies of Azerbaijan, Belarus, Kyrgyzstan and Tajikistan are not linked to any specific level, but the central banks of these countries seek to smooth fluctuations through interventions. So their regimes are not considered fully floating nor pegs and IMF groups such foreign exchange arrangements under the "other managed arrangement" category. Only Turkmenistan still pursues a pegged exchange rate policy. The Turkmenistani manat is pegged to the US dollar and has held its value stable since devaluation at the end of 2014. 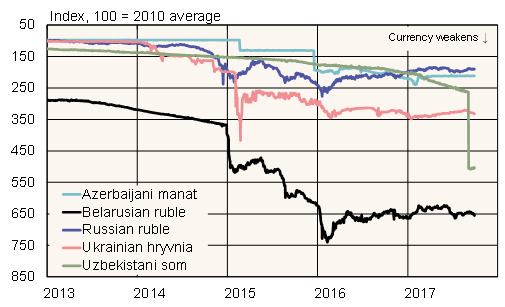