Between 2014 and mid-2016, wages in Russian industry declined relative to many countries on the ruble's sharp devaluation. In the manufacturing sector, the average monthly wage relative to European countries was so far at its highest in 2013–14, when it was about 65o euros (gross wage before income taxes). By summer 2016, the Russian wage had fallen by about a third to around 450 euros.

More recently, Russian manufacturing wages have come back strongly, recovering close to their 2013–14 levels. In nominal terms, ruble wages continued to rise at around 8 % a year even in the recession years of 2015–16. In the first five months of 2017, they were further up about 9 % y-o-y. Adding to the increase, the ruble has appreciated rapidly since early 2016, roughly 30 % against the euro. 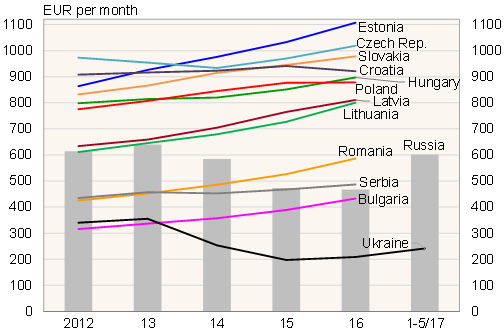