China's first-quarter current account surplus this year amounted to just $19 billion, down from $45 billion in 1Q16. The running four-quarter surplus at the end of 1Q17 declined to $170 billion, which corresponded to 1.5 % of GDP. Much of the drop in the current account surplus reflected a reduction in the size of the goods trade surplus, which itself was the result of higher growth in imports than exports.

The share of services imports has risen in this decade from 12 % to 20 % of China's current account expenditures. Most of this spending increase reflects the boom in Chinese tourism abroad. Chinese tourism spending for the twelve months ending in March exceeded $260 billion, which represented 57 % of all services imports. The growth in tourism spending, however, was down from very high double-digit growth just a couple years ago, rising just 5 % in the last 12 months. The slowdown in spending might partly reflect China's tighter currency controls, as some "tourism" spending is believed to be a cover for plain-vanilla capital exports.

China's earnings from services exports have represented less than 10 % of current account income throughout the current decade. A fifth of the services exports income comes from tourism. Earning from tourists visiting China fell slightly last twelve months ending in March to $44 billion.

While the headline figures for the capital account in the first quarter have yet to be released, tighter currency controls have stemmed capital outflows to such an extent that the current account surplus is sufficient to cover capital exports. Thus, there was almost no change in China's currency reserves. As of end-March, China's total currency reserves stood at just under $3.1 trillion. Based on the goods trade and currency reserve data, China's balance-of-payments situation in April was largely unchanged from the first quarter. 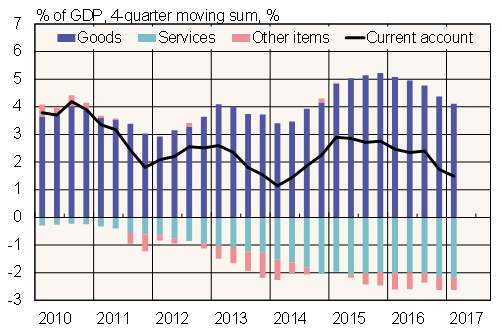