Rosstat's first estimate shows 0.5 % y-o-y GDP growth in the first quarter. The growth pace supports earlier reports from the economy ministry and central bank that the revival of seasonally adjusted GDP growth that gradually began in 2016 went on in 1Q17. Rosstat emphasized that the figure was preliminary, which partly reflects the earlier discussion in Russia about complexities in implementing its new GDP methodology.

The 4-quarter GDP growth figure is fairly good considering that first-quarter industrial output was essentially unchanged from a year earlier and that construction and retail sales decreased. Goods transport and wholesale trade, on the other hand, saw strong growth. Moreover, making early estimates of GDP growth is complicated by the fact that monthly data are not collected for real estate sector operations or public sector activities such as administration, healthcare and education, which together represent a third of GDP. From the demand perspective, GDP growth has been supported by buoyant gains in Russian export volumes. 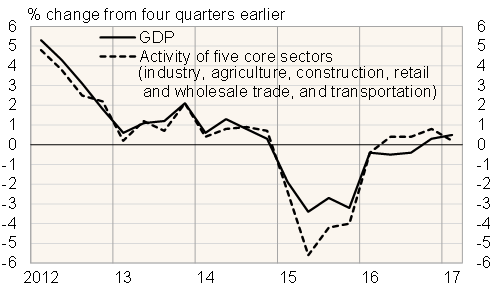