First-quarter revenues to the consolidated budget (includes federal, regional and municipal budgets, as well as state social funds) were up by 20 % y-o-y in nominal ruble terms. Revenues generated from the production and export of oil & gas were up by more than 50 %. Over half of the revenue increment, however, came from other revenues that rose far above inflation. Revenues from excise taxes (particularly tobacco products) and corporate profit taxes were up sharply. Revenues from the value-added tax and mandatory social contributions from firms on worker wages also increased. Consolidated budget spending rose by about 10 %. The fast recovery in budget revenues produced a tiny surplus (0.2 % of GDP).

The government last week submitted to the Duma its draft proposal for this year's supplementary budget. Budget revenues are now expected to increase more than in the budget approved earlier (the excess is 0.4 percentage points of GDP). In nominal terms, revenues should rise by 6 % this year if the earnings from the Rosneft share sale are excluded from the 2016 numbers. The excess comes mostly from revenues from oil & gas taxes, with the assumption that the price of Urals oil this year will average USD 45.60 a barrel (the previous assumption was USD 40/bbl). Other additional revenues to the budget assume GDP growth of 2 % this year.

Budget expenditures also rise a bit under the supplementary budget. They are set to grow by 6 % in nominal terms this year if the one-time sum given to defence industry for debt repayment is not included in the 2016 figures. Federal budget deficit will be 2.1 % of GDP (earlier estimate 3.2 %). The supplementary budget calls for hardly any changes in domestic borrowing or funding out of the government's Reserve Fund (RF) and the National Welfare Fund. While the RF will be drained this year, extra oil revenues flowing to state coffers this year will be put into the RF next year. 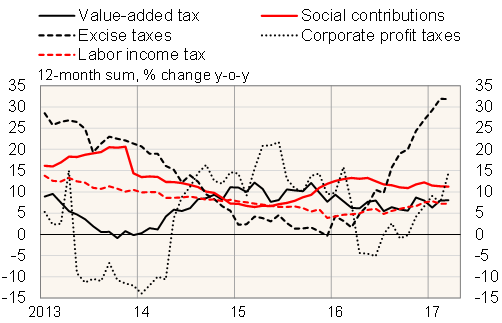 The finance ministry, however, still expects government spending to rise a bit further this year, bringing the deficit to 2.4 % of GDP. Observers note that the figure may reflect the unused portion of last year's budget. Finance minister Anton Siluanov says the money will be spent this year.