Russia last year had about a million unemployed persons between the ages of 15 and 24. The youth unemployment rate was 16 %, while the overall unemployment rate was below 6 %. Most young people do not participate in the labour force as they are full-time students, so the share of unemployed in the total 15–24 age cohort was about 6 %. A broader concept than unemployment, "not in education, employment or training," or NEET, comprises young people who do not study or work and thus face a higher risk of social exclusion. Russia had over 2 million NEET youth in 2015, which was about 12 % of the 15–24 age cohort. Slightly over half of unemployed young people were male, but most economically inactive NEET youth were female. The average youth unemployment rate in EU countries last year was 19 % and the share of NEET youth was 12 %.

A recent report from the Center for Strategic Research found that the share of NEET in Russia's youth has fallen notably over the past two decades, largely due to increased participation in education. With the rise in the general level of education, however, the share of more highly educated in unemployed and NEET youth has also grown. Graduates of poorer vocational training institutes and young people living in rural areas face a heightened risk of falling into the NEET category. The level of Russian vocational training has received criticism recently. For example, a recent survey of Russian industrial firms found that half of respondent firms mentioned that graduates from vocational institutes and colleges were poorly trained or completely lacking in practical skills needed in the workplace. 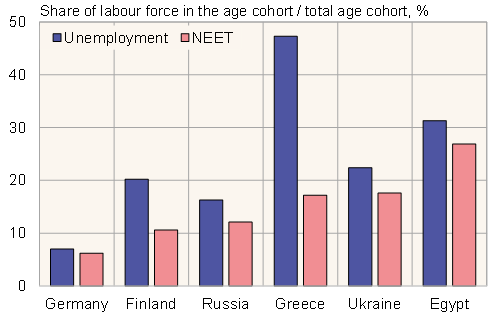