Moneymarket rates have risen in all maturity classes. The overnight Shibor rate in May has averaged 2.8 %, up from 2.2 % in January. In addition to higher interest rates, the volatility of interbank repo rates has increased. Shibor rates are calculated from rates quoted by 18 highest-rated commercial banks, while the repo rate is based on the average rate of completed transactions. Over the past six weeks, the People's Bank of China has stepped up open market operations to increase market liquidity and reduce pressure to further rate increases.

Financial market risks have been put in the spotlight in recent weeks by president Xi Jinping and supervisory officials announcing stricter guidelines. The shift has been manifested in lower liquidity on the interbank markets and efforts to take a stronger stance on risks created by the shadow banking sector. The China Banking and Regulatory Commission (CBRC) this month issued new guidelines on increased supervision of collateral used to secure loans.

The rise in interest rates is also visible in bond markets, where the yield on the one-year government bond has risen from 2.7 % in January to 3.5 % this week. Yields on corporate and local government bonds are also rising. Real interest rates have risen faster than nominal rates this year due to low consumer price inflation at the start of the year. Consumer price inflation was 1.2 % in April, while producer prices rose on-year by 6.4 %, even if they declined on-month. 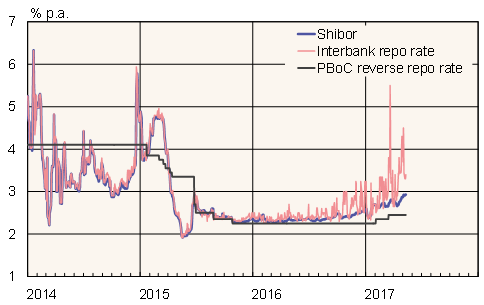