The rise in consumer prices peaked at around 17 % in spring 2015 after the sharp fall of the ruble in late 2014 and early 2015 led to a spike in consumer and producer prices. Over the past two years, the pace of inflation has slowed gradually due to the ruble's exchange rate recovery, two consecutive bumper grain harvests and the Central Bank of Russia's reconfiguration of monetary policy that has set inflation targeting as its objective.

The CBR's inflation target remains 4 % by the end of this year. Given the high inflation episodes of the past two decades, however, inflation expectations remain considerably higher than the inflation target. Expectations have also softened somewhat in recent months, providing the CBR with room to lower rates (the key rate is currently 9.25 %). Nevertheless, real interest rates in Russia are historically high, with the nominal average rate on corporate loans of under a year's maturity above 11 %. 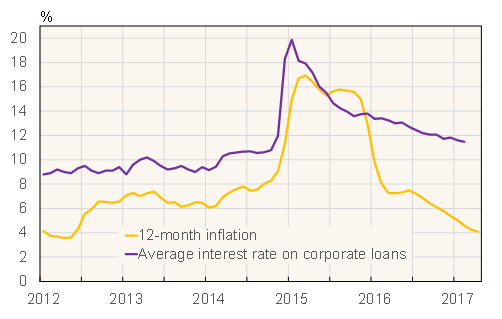