Preliminary figures show that production of military and civilian products by Russia's defence-industrial complex (OPK) increased by over 10 % in real terms last year, even if the pace of growth slowed from the previous three years. Despite the rapid growth of the OPK, manufacturing overall, which includes OPK, has shown sluggish growth and even contraction in recent years. In fact, during 12 of the past 15 years growth of OPK production has been much faster than overall manufacturing growth.

Within the OPK, production of military products increased substantially faster than civil industry for over a decade. Unlike the military industry, the civil industry was not spared large drops in production during the Russian economy's recession years of 2009 and 2015. Production intended for civilian use amounted to just 17 % of OPK production in 2016, down from about 45 % in the mid-2000s.

Boosting OPK production by about 9 % a year, and bringing growth in OPK's civilian production to 5 % a year is the aim of the 2016–2020 OPK development programme approved a year ago by the government. While this year's federal budget would reduce defence spending to below the 2016 level, Russia's defence ministry has pointed out that the cuts do not affect the armament programme. Prime minister Dmitri Medvedev recently noted that the share of civilian production in the OPK is intended to increase notably in the 2020s.

The OPK employs about 2 million people, of which over 1.4 million work in the defence industry. Estimates put the share of OPK in Russia's total industrial output at 5–6 %.

Real growth of the defence-industrial complex and total manufacturing output 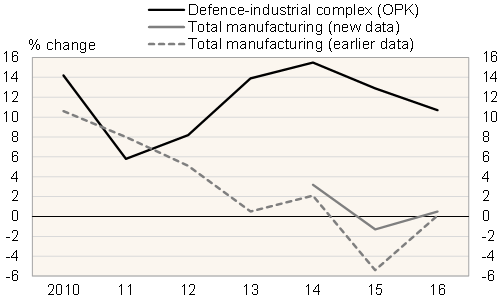