Car sales in the first quarter were up 5 % y-o-y. Chinese car sales and production go hand in hand as less than 2 % of production is exported and less than 4 % of cars sold in China are imports.

Part of the burst of growth in passenger car production and sales in the second half of 2016 reflected the known tax hike on January 1st 2017. As part of stimulus policies, small-engine car buyers were entitled to a tax break last year that meant they only paid a 5 % sales tax on the car. The sales tax is 7.5 % this year and 10 % next year.

Even if imported cars account for a tiny share of the Chinese market, foreign brands dominate the market. Less than half of cars sold in China are domestic makes. Foreign carmakers must engage in joint ventures with Chinese firm because foreign firms can only own up to 50 % of a production plant in China. Bloomberg reports that this limitation might be loosened as a part of efforts to make state-owned enterprises more efficient and response to pressures for open markets. The car industry's future is further affected by planned producer-specific minimum quotas for electric vehicles. 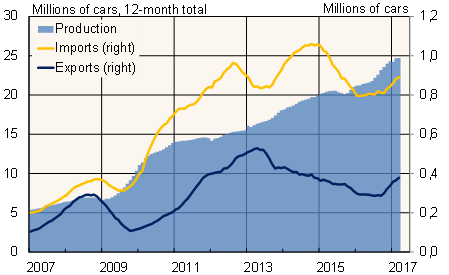