Notably, 2016 defence spending includes budget money given to the defence industry (OPK) intended for early repayment of bank loans granted from 2011 onwards to OPK with federal guarantees. The federal accounts chamber reports the amount paid from the budget for the repayment exceeded 1 % of GDP. If this amount is excluded, defence spending fell markedly last year even in nominal rubles. However, the to-be-paid-off OPK loans in fact earlier came on top of the rapid growth in defence spending, especially during 2013–14.

The differences in defence spending numbers reflect the fact that SIPRI and IEP include items in other budget spending categories outside the budget's defence category such as domestic security, the economy and social security. IEP figures also include e.g. budget spending on earlier defence activities such as weapons destruction costs, which SIPRI does not treat as defence spending.

In SIPRI's international comparisons, Russian defence spending has grown rapidly in recent years. Spending in 2016 hit $69 billion. China's defence spending has also climbed briskly, even if the spending growth slowed last year to below 5.5 %. SIPRI estimates Chinese spending last year at $215 billion and says that its estimates for recent years have been running at about 1.5 times China's official defence budget. Even so, SIPRI noted that Chinese defence spending relative to GDP was still less than 2 %. China recently launched the first Chinese-built aircraft carrier.

SIPRI reports global military spending in 2016 reached nearly $1.7 trillion. US spending alone amounted to $611 billion, an increase after several years of decline. The US defence-spending-to-GDP ratio was 3.3 %. Growth in India's annual defence spending leapt to 8.5 %, putting it together with France as regards the nominal dollar level of spending. Both countries spent about $56 billion last year on defence, giving both a defence-spending-to-GDP ratio of just under 2.5 %. SIPRI reports that nearly all countries of Central and Eastern Europe, the Baltics and Ukraine have increased their defence spending rapidly in recent years. Defence spending also rose briskly in all but a few countries in Western Europe. 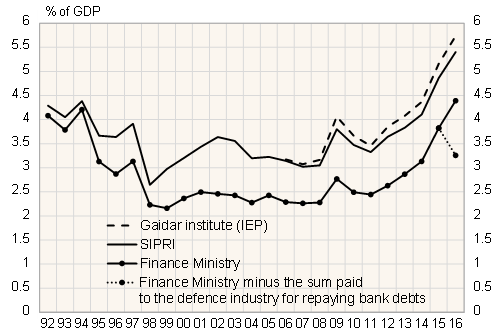