Total fixed investments fell by about 12 % in real terms in 2014–2016. The ratio of fixed investments to GDP is just 21 %. Government investments (state, regions and municipalities) have shrunk. In 2015–2016, investments of domestic private and joint private-state firms have also declined. Except in 2015, investments of fully foreign-held firms have fallen sharply. In contrast, investments of joint firms of Russian and foreign owners have risen, especially in 2016 when the joint venture investment boom was driven entirely by investments in the natural gas sector (Yamal LNG project). Private domestic firms accounted for 55 % of total investments. The government's share has fallen to below 20 %. 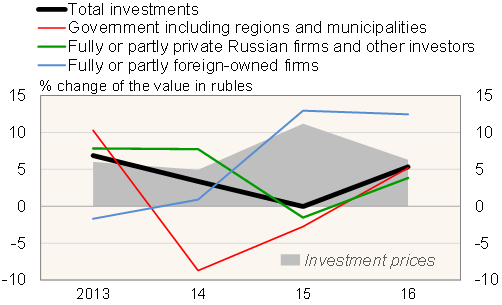