With the decrease in prices of fresh foods, the rise in consumer price inflation, remained below 1 % in February and March. Core inflation (energy and food prices removed) stayed around 2 %.

Lifted by rising commodity prices, Chinese producer prices rose 8 % y-o-y in March. The month-on-month rate of increase has slowed, however. Commodity prices were exceptionally low at the start of 2016, so their base impact the start of this year on inflation will moderate as this year proceeds. Import prices were up 14 % y-o-y in March, while export prices were up 5 %. The rise in industrial prices was also apparent in China's GDP deflator (difference between nominal and real GDP growth), which was up 5 % in the first quarter. 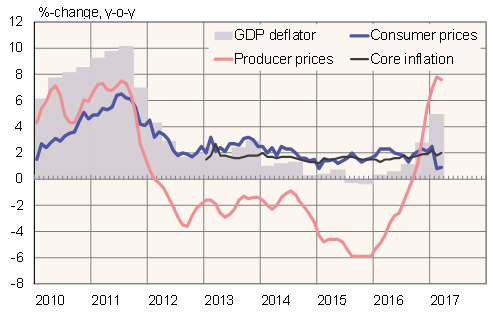