The first set of quarterly GDP data for the entire year 2016 from Russia's national statistics agency Rosstat tell about the economy's recovery. In the fourth quarter of 2016, GDP was up by 0.3 % y-o-y. The total import volume in 4Q16 was also up 0.3 % y-o-y.

Looking at demand components of the economy, however, the volume of private consumption was still down by more than 3 % y-o-y in the fourth quarter. While fixed investment in the third and fourth quarters was no longer down more than only about 0.5 % y-o-y, it is worth recalling that it was especially during those periods that the decline in fixed investment was offset by a massive investment in the giant liquefied natural gas project on the Yamal peninsula. Economic activity got its biggest support from Russian exports. As in the second and third quarters, the total volume of exports of goods and services was up remarkably in the fourth quarter (nearly 4 % y-o-y).

The backward-updating of Rosstat's GDP figures since its change in statistical methodology continues. Rosstat to date has released its revised GDP data according to the latest internationally accepted methodology that it applies (SNA 2008) only back to 2014. The first SNA 2008 data for 2014 and 2015 released over a year ago raised the size of Russia's GDP by nearly 10 %. The extent to which annexation of Crimea apparently exaggerates the 2014 growth figures has not been clarified either. Instead, the GDP data releases still carry the note that Crimea is included in the 2014 data both as regards the level of GDP and also GDP growth. With Crimea included, Russian GDP grew by 0.7 % in 2014. 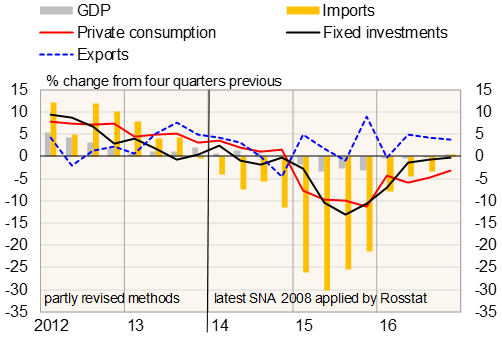 The lack of longer GDP time series decreases the reliability of cleaning the basic data from the normal seasonal variations that the data includes. Notably, it has been a while since Rosstat released any seasonally adjusted GDP figures.

With a decision signed by president Putin this week, Rosstat becomes an agency of the economy ministry. The move does not necessarily relate to the ongoing statistical reform.