Preliminary data suggest Russian GDP still contracted last year by 0.2 %, but our latest Forecast for Russia sees GDP rising by 1.5 % this year. Growth will be supported by higher oil prices, which markets currently expect to average nearly $55 a barrel over the next three years.

The impact of public sector spending on growth will continue to fade. The approved 2017–2019 budget framework calls for reducing government spending in real terms. The Central Bank of Russia has kept its monetary stance moderately tight to reach its 4 % inflation target this year.

The gradual revival of demand and a significantly stronger ruble should bolster growth in imports this year. The volume of imports, which in total fell by over a third in recent years, is expected to increase by 6 % y-o-y over the next three years. Growth in imports will be moderated in part by import restrictions on several food items and public procurements. The volume of exports will grow slowly in coming years due to constraints on both supply and demand.

A key risk to the forecast is the price of oil. Any large price swings could be quickly reflected in Russia's economic performance. The approaching presidential elections next year could increase pressures to boost public spending, which could temporarily accelerate growth. GDP growth might be slower than predicted, however, if imports rebound from their deep slump faster than expected.

The Russian economy should continue the moderate 1.5 % p.a. growth in 2018 and 2019. The economy is already operating near its limits of capacity and currently there are no decisions on the structural reforms needed for achieving higher sustained growth. 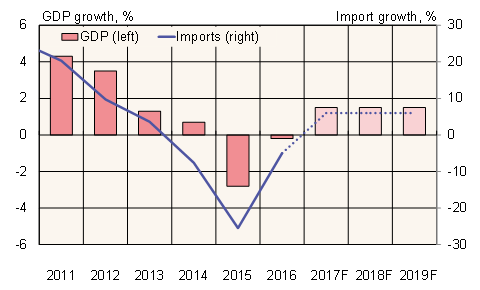