China's economic growth remained brisk in the start of this year, and may even have accelerated slightly since last summer. The long-term trend, however, is clearly to a lower-growth environment. China's economic trends remain largely in line with BOFIT's previous forecasts. Under our current Forecast for China, we still see GDP growth slowing to 6 % this year and falling further to 5 % p.a. in the out years of 2018 and 2019. As Chinese economy has developed, the easy opportunities for boosting growth become increasingly scarce. Growth will also be constrained by an ageing population, the growing share of services in the production structure and environmental problems.

China's growth has been largely debt-fuelled. Due to lax fiscal and monetary policy, China's debt-to-GDP ratio now exceeds 255 %, an enormous figure for an emerging economy. Corporate debt is high even compared to many advanced economies. The slow-down of GDP growth combined with the continued rapid expansion of debt predict difficulties, which are reflected in financial markets as increased capital outflows and expectations of yuan depreciation.

Officials have sought to calm the markets by tightening restrictions on capital movements and intervening in forex markets. Lasting improvement of the situation would require a faster progress in economic reforms, but things are presently quiet on the reform front. The government's strict adherence to a 6.5 % GDP growth target is unfortunate from the standpoint of responsible economic policy. Growth targets force government borrowing at all levels to pay for stimulus, even though China's labour markets seem well able to tolerate lower growth conditions. Targets also encourage falsification of statistical data. With the recent revelations of instances of data fraud, this is now considered a real problem.

Our forecast assumes that reform policy will assume a higher priority after the National Party Conference this autumn, when key party posts are filled. 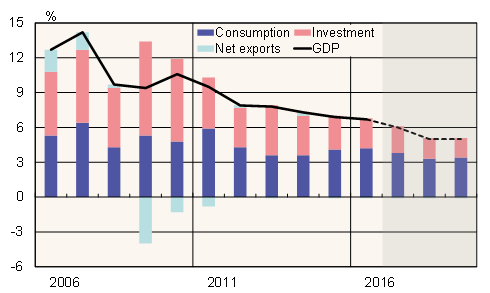