In the first two months of this year, seasonally adjusted and workday-adjusted industrial output continued to lack clear direction. After lurching ahead in January, production fell considerably in February. The volume of industrial production for January-February was slightly lower than a year ago, whereas the on-year drop in February was more than 2.5 %. Part of February's weakness reflected a difference in the number of workdays compared to February 2016.

Manufacturing output fell 5 % y-o-y in February, with a combined January-February drop of nearly 2 % y-o-y (and well over 2 % less than three years ago). Production of extractive industries was up 1.7 % y-o-y in January-February, with crude oil output rising by 2 % and natural gas output up by nearly 10 %. Economy minister Maxim Oreshkin said that the industrial output figures may well be revised later this year, noting that the switch-over to a new statistical classification system had not proceeded successfully.

After a two-year slide, seasonally adjusted retail sales rose slightly in the January-February period. Even so, the sales volume was down by a couple of per cent from a year ago. Food sales were still down 4 % y-o-y, while sales of non-food goods were no longer down more than 1 %. The performance in retail sales was sluggish compared to real household incomes.

Real incomes in January-February were up as a total by 1 % y-o-y, even if they dipped markedly in February. Real incomes were supported by higher real wages and two substantial pension pay-outs. In January, all pensioners received (as promised in the lead-up to last autumn's Duma elections) a hefty one-time payment. At the start of February, pensions of non-working pensioners were adjusted fully for inflation. Pensioners continuing to work, due to a rule change last year, are no longer entitled to the annual inflation adjustment. Russians kept a large part of the household income increases in January-February in their bank accounts. 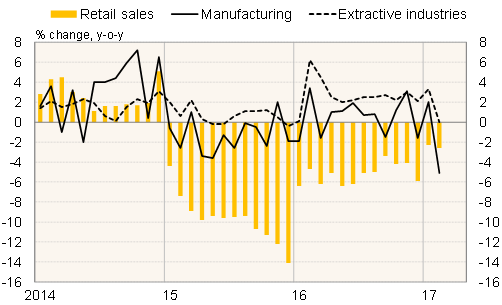