The Central Bank of Russia opened its first overseas office last week in Beijing, making it the 13th representative office of a foreign central bank in that city. In Moscow, People's Bank of China opened the first yuan clearing bank in Russia this week. There are about 20 yuan clearing banks in the world.

In recent years, Russia and China have sought to intensify cooperation in the financial sector. Russians are eager for access to Chinese financing, especially since Western sanctions have made it harder to get foreign loans. China, in turn, wants to promote increased international use of the yuan.

While use of the yuan in bilateral transactions has increased in recent years, it is still relatively modest. In the first nine months of 2016, Russia's private sector (excluding banks) borrowed $2.2 billion from Chinese lenders, which amounted to about 5 % of the private sector's entire foreign borrowing. Yuan-denominated borrowing amounted to about $200 million. About 10 % of bilateral trade last year was conducted in yuan and 4 % in rubles. The Russian government holds no yuan-denominated debt, but has planned to issue yuan bonds. None of Russia's currency reserves are presently invested in yuan assets. 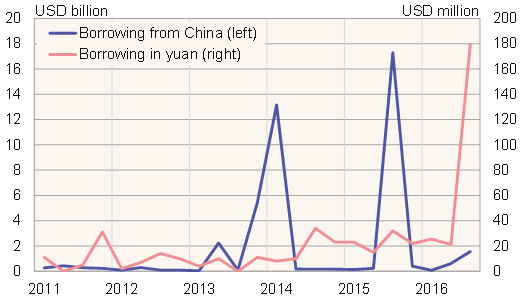