Private consumption last year fell by 5 % and real household incomes by 6 %, even as the average real wage rose slightly. Several factors underlie the difference. Rosstat's data for the total sum of household wages give a far weaker picture of last year's wage performance than its average wage figures. Current data suggest that growth of the nominal ruble wage sum was flat last year, so the sum fell by over 7 % in real terms. Wages represented 65 % of total household income (Rosstat estimates include grey wage payments). Given that employment levels remained unchanged and the wage arrears growth was marginal, the weak wage sum performance of households could reflect a drop in grey wages or an increase in part-time employment.

The increase in social support paid to households (nearly a fifth of total household income) slightly lagged inflation last year, mainly due to small pension increases. Households' finance behaviour did not prop up consumption very much. Household borrowing was rather slack and the savings rate did not drop appreciably.

Higher payments of taxes and related fees cut into household spending. Spending on goods and services increased last year in nominal ruble terms by just 3 %. Spending on services increased slightly more, contracting a little in real terms. Spending on goods purchases rose by a couple of per cent, i.e. declined about 5 % in real terms (same as the drop in retail sales). Private consumption overall was further depressed by a steep decline in spending of Russian tourists abroad. 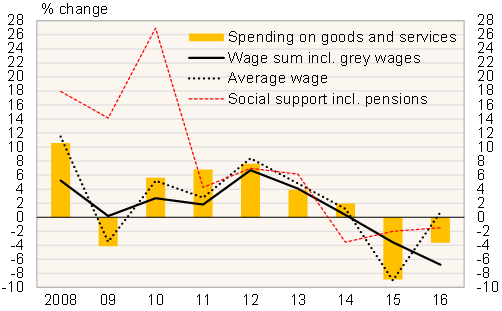 Data on household spending and income could improve after a possible revision. The Central Bank of Russia computed that the volume of retail sales may have contracted by only a couple of per cent in 2016. The CBR also noted that its estimate is supported by certain datasets and surveys on consumption and retail sales. Final conclusions are complicated by difficulties in estimating inflation and changes in the composition of shopping baskets of consumers.