About a quarter of total investment comes from small firms and the grey economy. Rosstat figures mean that such investment remained at about the same level in 2016 as in the previous year. During the current recession, these investments only contracted in 2015, when they fell several per cent. Other fixed investments, which are mostly investments of large and mid-sized companies, shrank by about 1 % last year. However, the slide in such investments in the previous three years was steep (down 10 % in 2015 alone), so their level last year was several per cent below that of the 2009 recession.

After contracting for two consecutive years, investments in machinery & equipment by large and mid-sized companies remained more or less flat last year. Construction activity was down over 4 % last year, thus falling for the third year in a row. Notably, despite a drop already in 2015, far fewer commercial and industrial buildings were completed last year than in 2015. Fewer apartment buildings were also completed last year compared to 2015. It was the first drop in housing completion since 2010. 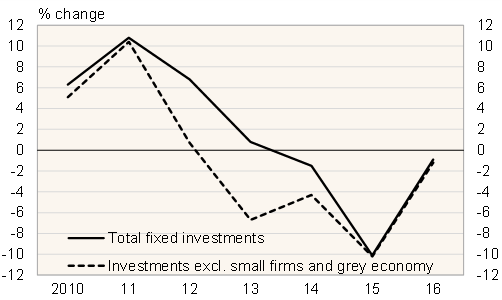