In recent years, the ruble's exchange rate and Russian stock market prices have closely tracked trends in oil prices. The oil price to a large extent defines the value of Russian exports, and the weight of oil & gas companies in Moscow stock index is over half. This year, however, the ruble has appreciated and share prices fallen even as the price of a barrel of Urals crude has remained relatively stable at around the $53 level.

Many analysts have been surprised by the ruble's gains of around 5 % against the dollar and the euro since the start of the year. The finance ministry's decision to start buying foreign currency was expected to slightly lower the ruble's external value, but the volume of purchases has been quite modest. Currency-buying in February amounted to around $2 billion and the amount announced for this month is $1.2 billion.

Many market analysts view the ruble's recent strengthening to stem from "carry trade" investing that takes advantage of Russia's relatively high interest rate level. The Central Bank of Russia's research department, however, notes that the ruble's attractiveness as a carry trade currency is reduced by its higher volatility. It sees the recent appreciation instead as a reflection of seasonal fluctuations in the current account, capital flows related to the December sale of the Rosneft stake and a general increase in interest among international investors in emerging markets.

The ruble's appreciation has been slightly stronger in real terms due to Russia's higher inflation rate relative to its main trading partners. Moreover, compared to its lows in the first months of 2016, the ruble has recovered considerably. The ruble's nominal effective (trade-weighted) exchange rate (NEER) in February was up 36 % y-o-y. The real effective exchange rate (REER) was up 38 %.

The Moscow exchange's dollar-denominated RTS index is down about 9 % this year. Among reasons mentioned for the decline are the rapid rise in share prices last year (up nearly 30 %) and the disappointment of some investors from overly optimistic expectations of an early lifting of US sanctions. 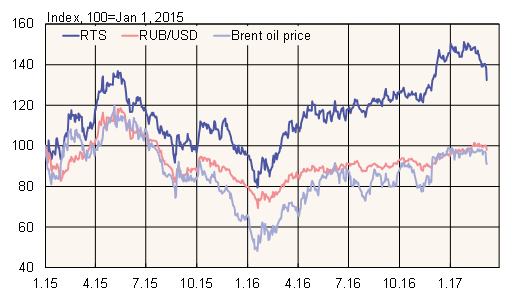