After contracting for 14 consecutive quarters in annual terms, thevalue of goods exports rose 6 % y-o-y in 4Q16. Fastest growth was recorded for metals exports partly buoyed by higher prices, but exports of e.g. machinery & equipment and foodstuffs also rose. The recovery remains shaky, however, as the value of exports fell slightly again in December. Exports this year are expected to achieve more robust growth supported by a gradual recovery in Russian demand and stronger ruble. In the first part of the year exports could see even quite brisk growth relative to the low starting point, but later growth is constrained by Russia's weak growth trend.

Exports of travel services seem to have also revived late last year. After contracting for eight quarters in a row, Russian overnight stays in Finland rose by 7 % y-o-y in 4Q16, and were up by nearly 20 % y-o-y in December. As suggested by double-digit growth figures for border crossings and tax-free purchases in January, the recovery in Russian tourist traffic to Finland is likely to continue this year, but the levels of tourism are nowhere near the peak of earlier years.

The value of Finnish goods imports from Russia was up in 4Q16 by nearly 30 % y-o-y, lifted largely by higher oil prices. Oil accounts for the majority of Finnish imports from Russia. Imports of metals showed strong growth towards the end of last year, with import volume of nickel mattes rising many fold. Growth in sawn wood imports continued despite ruble appreciation, while raw timber imports fell. 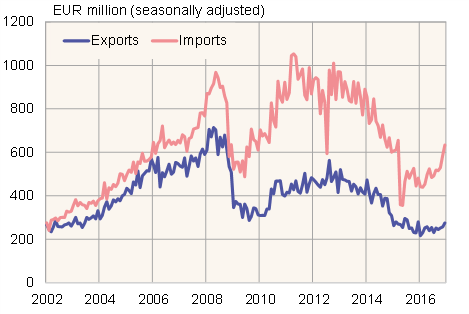