The consolidated budget, which combines federal, regional and local budgets, and state social funds, showed a slight revenue increase from 2015 in nominal ruble terms. In real terms, revenues fell almost 5 %. If the funds received from last year's sale of the stake in Rosneft are included (as they are in the official budget data), the drop in real revenues was 2 %. In real terms, revenues were down by 17 % from 2014 and at the same level as ten years ago. Once again, it was falling revenues from oil & gas taxes that produced a weak total revenue performance last year. Other revenues rose slightly in real terms. Revenues from excise taxes on alcohol, tobacco and automobile fuels rose sharply. Income from mandatory social contributions, the government's largest revenue stream, grew briskly mainly due to a continuous fast rise of revenues from health insurance payments. Revenue growth for other large major taxes kept pace with inflation. Many of the minor budget revenue streams exceptionally declined.

In real terms, consolidated budget spending fell by about 1.5 % in 2016. Real spending was down 8 % from 2014 and at the level of 2011−2012. Besides the boom in defence spending, only the increase of healthcare spending managed to outpace inflation slightly. Pension spending and other social spending rose slightly slower than inflation as normally scheduled inflation adjustments e.g. to pensions were omitted last year. Other spending continued to plunge in real terms. The deficit amounted to 4.5 % of GDP. 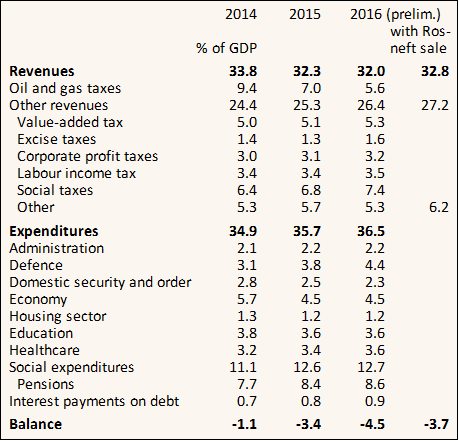 Sources: Ministry of Finance and BOFIT.