Following the adjournment of the National Congress, China announced on October 23 that third-quarter GDP growth rose by 3.9 % y-o-y in the third quarter. In q-o-q terms, growth was also close to 4 %. BOFIT’s own alternative estimates, however, indicate that actual 3Q GDP growth was likely lower than official figures suggest. The disparity between official and alternative figures has increased substantially this year.

Monthly indicators show that consumer demand weakened again in September. Nominal growth in retail sales fell from 5 % y-o-y in August to 2.5 % in September. Because real growth figures for retail sales are no longer released, it must be proxied by consumer price inflation, which was 2.7 % y-o-y in September. Weak demand was also reflected in imports, which fell in September by 0.4 % y-o-y in dollar terms. Export growth slowed throughout the third quarter, falling to annual pace of 5.6 % in September. In contrast, industrial output revived slightly, climbing above 6 % in September. Production increased most in such branches as transport vehicles, solar panels, generators and aluminium alloys. Larger production decreases were seen in metal containers, portable power tools and semiconductor chips.

China’s zero-covid policies have been particularly hard on economic growth, leading to production stoppages, restrictions on movement, increased uncertainty and lower demand (especially in retail sales and service branches). In addition to weak demand, developers continue to struggle with financing, limiting any chances of recovery in the real estate sector. The third quarter saw a drop of 45 % in new building starts and a 22 % decline in real estate sales from 3Q21. A record slowdown in growth of the household loan stock also reflects the agony of the real estate sector. In September, the stock of household loans grew by just 4.5 % y-o-y (at the end of 2021, growth was still well in double digits). Lending to households represents just under 30 % of the total bank lending stock. On-year growth in the stock of corporate loans increased to 14 % in September.

Media reports continue to mention new and widening covid measures. China’s official purchasing manager indices for manufacturing and services fell in October below the neutral reading level of 50 points, implying a contraction in economic activity is underway. London-based Markit’s PMI readings for manufacturing and services, which cover relatively more privately held firms and firms operating in the export sector, have both been below 50 since September. 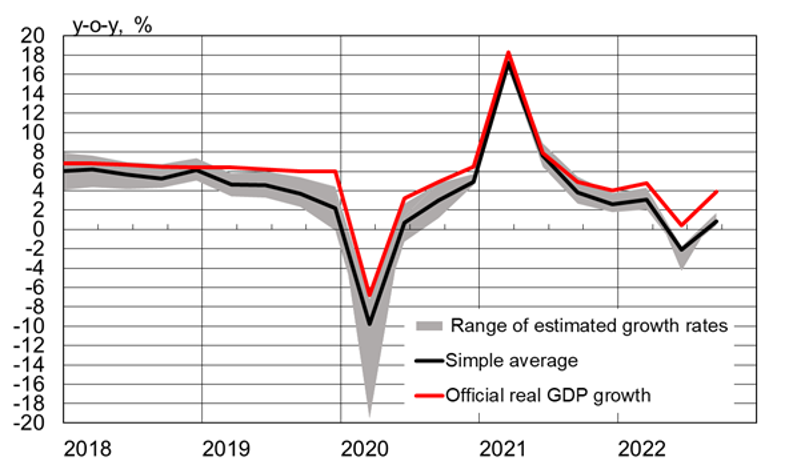