In Russia’s government budget sector framework for 2023–2025, the finance ministry expects revenues to the consolidated government budget (federal, regional and municipal budgets plus government social funds) to rise by 10 % in nominal terms this year but only about a half percent next year. The revenue swings reflect see-sawing oil & gas tax revenues, which largely reflect a rise in the price of Russian Urals blend crude oil and an assumed fall of the price next year. Income from oil & gas taxes represented 19 % of consolidated budget revenues in 2021.

Other consolidated budget revenues are expected to increase by 6–7 % in 2022–2023, i.e. lag inflation. In the economy ministry’s forecast, which is the basis for budget revenue estimates, inflation is forecast to slow significantly next year, but due to this year’s high inflation, consumer prices would rise on average by 10 % p.a. over 2022–2023. Producer prices for domestic industrial supplies would rise by about 7 % p.a. Budget revenue projections are based largely on the economy ministry’s GDP forecast, which is clearly more optimistic for this year and especially next year than in nearly all other major forecasts.

The limit on federal budget deficits (equivalent to 1 % of GDP this year and 2 % next year) determines the frame for all consolidated budget spending. Regional and municipal budgets as a whole, as well as social fund budgets, are to be kept very close to balance after transfers from the federal budget because there is little chance for them to borrow considering the scale of the consolidated budget.

Revenue projections and efforts to rein in the deficit are expected to result in an increase in consolidated budget spending of 15 % in nominal terms this year but less than 4 % next year. As spending is expected to rise this year and next only slightly faster than inflation, the real spending would rise by less than 1 % p.a. in 2022–2023. On the other hand, a large amount of government guarantees has been reserved for this year to support bank lending to corporate customers.

If the economy contracts more than the economy ministry forecasts and consolidated budget revenues are weaker than calculated, it will be challenging to further scale down the already tepid spending plans in the current wartime and recessionary conditions. The alternative is larger budget deficits.

Large turns in the structure of the consolidated budget are coming. Spending on domestic security and law enforcement, 95 % of which comes directly from the federal budget, is set to skyrocket to a new level this year and next. Defence spending and spending on administration will also grow rapidly this year. Different sectors of the economy are at least so far scheduled to receive very little additional budget spending even with a recession at hand. 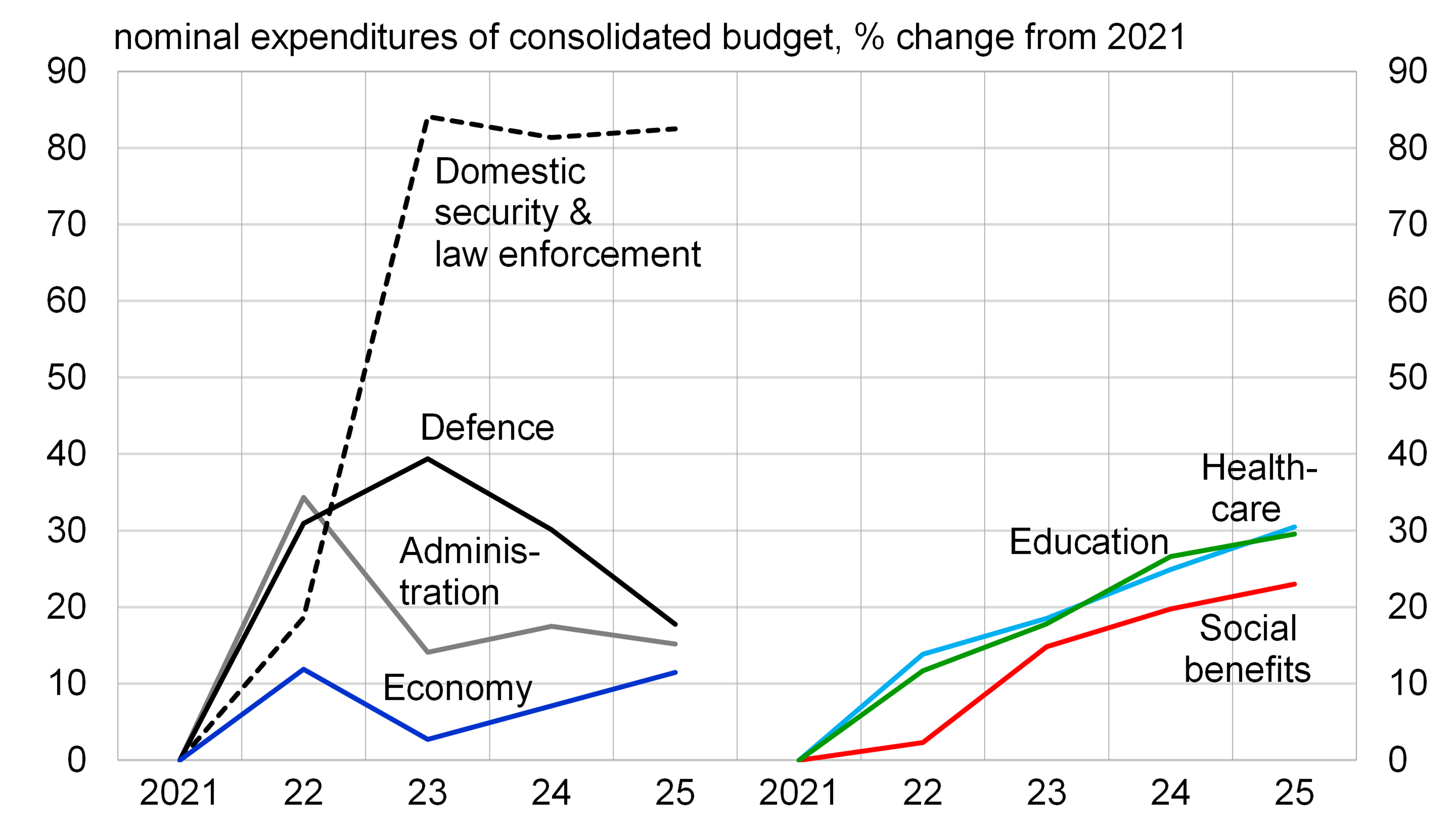