Russia’s released figures confirm that imports to Russia have declined with the ongoing economic recession and foreign export sanctions. Russian spending on imports of goods and services was down in the second quarter by over 20 % y-o-y in dollar terms and 12 % in euro terms. The decline was rather small given that export figures for EU countries show that in March-May EU countries earnings from goods exports to Russia were about half of what they were a year ago in euro terms. Russian figures thus reflect more moderate drops in Russia’s imports from other countries (notably China and Turkey).

With the rise in export earnings and declining imports, Russia’s trade surplus for goods and services hit a record of nearly 160 billion dollars in the first half. The running four-quarter surplus rose in the second quarter to around 13 % of GDP. Other revenues and expenditures on the current account were slightly in deficit as usual. In any case, Russia’s current account surplus has hit new highs this year. The surplus was over 10 % of GDP during the latest four-quarter period.

Regarding the financial account with the rest of the world, the CBR’s balance-of-payments figures released this year only include a lump figure for the financial flows of the private sector, government and central bank. The figure also comprises the CBR’s transactions with its foreign currency and gold reserves (publication of the transactions data is still suspended e.g. in the balance-of-payment figures). Anyhow, the financial account showed large deficits in the first and second quarters, hitting record highs (130 billion dollars for the first half). The deficits refer to a substantial net outflow of capital from the private sector as the government and central bank financial flows abroad are generally relatively small and the March western sanctions banned transactions with the CBR. The large financial account deficit this year resulted both from large capital outflows that reduce foreign debt and other liabilities and large capital outflows that increase foreign receivables. 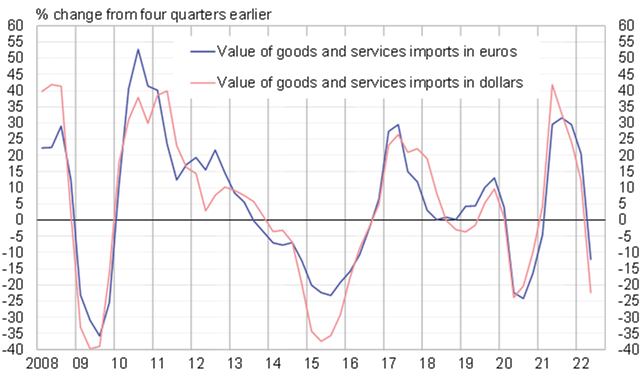 Sources: Bank of Russia and BOFIT.