With covid restrictions in China’s biggest cities more relaxed compared to April, industrial output showed signs of recovery in May. However, the National Bureau of Statistics reported that growth remained at just under 1 % y-o-y and that the level of industrial output was still lower than in March.

Chinese consumers have been taking a beating. Retail sales activity was down by 7 % y-o-y in May in nominal terms (down 11 % in April). Retail sales are estimated to have fallen by about 9 % in real terms, even though the NBS hasn’t released real retail sales growth figures for recent months. The value of sales of catering services fell by 21 % y-o-y in May. Growth in online sales has also slowed this year. The value of online sales increased by just 3 % in the first five months of this year.

Consumers boosted their savings as spending opportunities were reduced by covid lockdowns and heightened uncertainty. Figures from the People’s Bank of China show that households boosted their bank savings in January-May by 7.86 trillion yuan, an increase of over 50 % from a year earlier. With the slowdown in the housing sales, household borrowing also cooled. During the first five months of this year, new bank loans to households amounted to 1.33 trillion yuan, a more than 60 % drop from the same period last year. The value of January-May real estate sales was also down by 31 % y-o-y.

Foreign trade revived in May as covid lockdowns were relaxed. The value of goods exports in dollar terms rose by 17 % y-o-y, while the value of imports was up by 5 %. Trade volumes this year have not grown as quickly as trade values. China Customs reports that the average volume of goods exports in January-April was roughly on par with the same period a year earlier, while the volume of imports fell by about 8 %. At the same time, the value of exports grew by 12 % and the value of imports by 8 %. In addition, the foreign trade figures compiled by Germany’s Kiel Institute for the World Economy show the volume of Chinese exports in January-April was roughly the same as a year earlier, but up in May.

Inflation is currently not a major concern in China. The 2.1 % rise in consumer prices in May was unchanged from April, as was core inflation (excludes food and energy prices) at 0.9 %. On-year growth in producer prices has slowed since the second half of 2021, falling to 6.4 % in May.

China’s industrial output well exceeds pre-pandemic levels, but the volume of retail sales has been declining for the past 12 months. 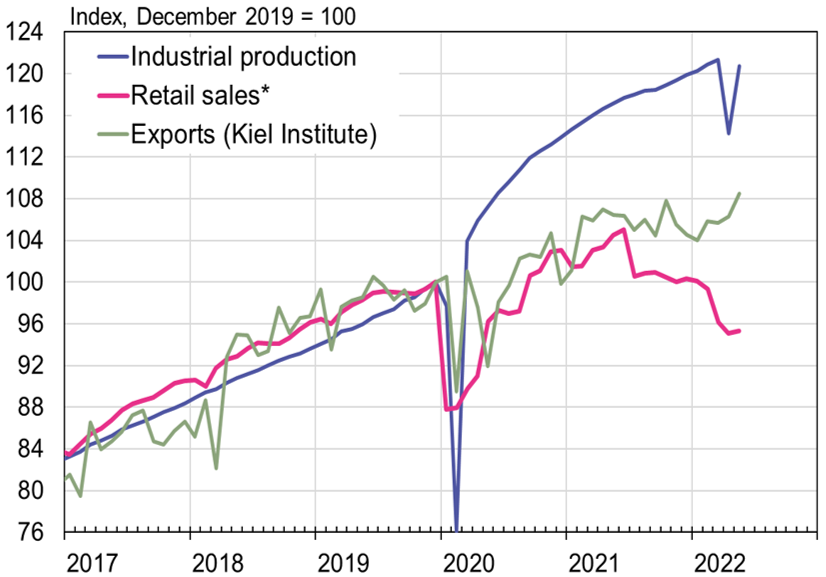