SWIFT, the Society for Worldwide Interbank Financial Telecommunication, reports that in January the yuan became the fourth-most-used global payments currency, accounting for 3.2 % of all payments. The yuan still distantly lags the US dollar (39.9 % share), euro (36.6 %) and British pound (6.3 %).  Its use has increased from January 2020, when the yuan was sixth in the international use ranking, trailing the Japanese yen and Canadian dollar. Hong Kong is China’s main offshore yuan trading hub, accounting for over 75 % of offshore yuan payments in January. The next biggest yuan payment intermediaries were the United Kingdom (6 % share), Singapore (3 %) and South Korea (3 %).

Gradual capital market opening and increased foreign ownership especially in mainland-China bond markets has increased international yuan usage. The People’s Bank of China reports that foreign investors held $642 billion in mainland China bonds (up by 23 % y-o-y) at the end of 2021. Even so, that represents just 3 % of China’s overall bond market. Foreign ownership is concentrated in government and policy bank bonds that are also included in international bond indices. Central banks have also added to their yuan-denominated reserve holdings, most notably Russia’s decision to shift its reserve assets out of dollars into other currencies. IMF figures show that 2.7 % ($319 billion) of allocated forex reserves globally were in yuan in September 2021. Figures from the Central Bank of Russia show that 13 % ($78 billion) of its currency reserves were in yuan in June 2021. That amount represented a quarter of all yuan central bank forex reserves globally.

Foreign participation in China’s stock markets has increased since 2019, when shares of mainland China firms were included in international stock market indices. The value of foreign ownership in mainland China equites was $619 billion at the end of 2021, roughly 4 % of China’s stock capitalisation. Foreign investor trading and holdings have been boosted by the Stock Connect arrangement between Hong Kong and the Shanghai and Shenzhen bourses. The Stock Connect arrangement between Shanghai and London, launched in 2019 (BOFIT Weekly 26/2019), has yet to generate much enthusiasm. Currently, investors only have access to the depository receipts of four Chinese firms. Chinese investors have zero access firms on the London Stock Exchange. To ameliorate the situation, China Securities and Regulatory Commission (CSRC), updated its rules for the Shanghai-London Stock Connect in February. The programme is also being expanded to Switzerland and Germany, as well as to firms listed on the Shenzhen Stock Exchange.

Increased international use of the yuan has been expedited with a payment infrastructure created by China. Even if it still only accounts for about 0.3 % of international payments traffic, China’s yuan-based Cross-border Interbank Payment System (CIPS) has experienced robust growth since its 2015 launch. Introduction of the digital yuan and cross-border testing of its use can make global use of the yuan easier in the future and reduce transaction costs. Ultimately, international use of a currency is determined by the issuing country’s economic fundamentals, financial market openness, legal frameworks and credibility. Without further lifting its capital controls, the digital currency itself is unlikely to boost international yuan use significantly.

While still relatively minor, international use of the yuan continues to rise 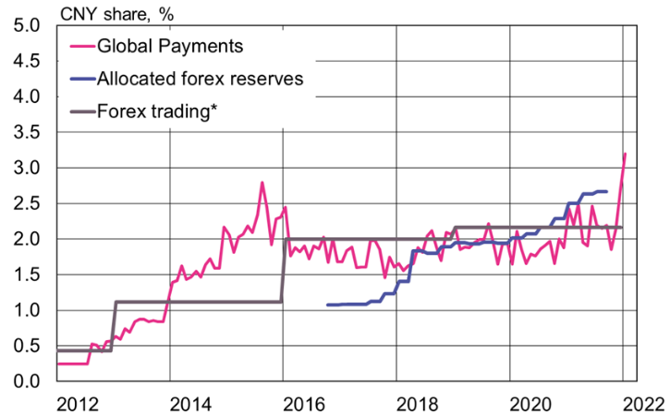 *The most recent BIS Triennial Central Bank Survey of Foreign Exchange was in 2019.