According to preliminary figures released by Rosstat, Russia’s grain harvest last year was about 121 million metric tons. In comparison to the bumper 2020 harvest, the volumes harvested were down by about 10 %. Over 60 % of Russia’s total grain harvest consists of wheat. In recent years, barley and maize together accounted for about a quarter of total grain harvest.

The commercial potato crop last year amounted to 18 million tons, which was about 7 % less than in 2020. Although the potato crop yield per hectare has risen over the past two decades, the area of land under cultivation has contracted sharply. For this reason, the statistically reported potato crop has continued to shrink. In the early 2000s, Russia’s annual commercial potato crop was about 29 million tons. Thanks especially to greenhouse production, vegetable cultivation took off dramatically in the early 2000s. In recent years, however, the vegetable harvest has remained consistently at a level of just under 14 million tons a year. Commercial vegetable growers also saw smaller crops in 2021, down by about 4 % from 2020.

Russia’s agricultural companies hold a dominant position in grain cultivation. About 70 % of Russia’s grain is harvested from fields cultivated by these firms. In contrast, over half of the potatoes and vegetables in Russia are grown in household gardens or plots of private citizens. Last year’s relatively weak grain and vegetable harvest contributed to increases in food prices in the second half of 2021. 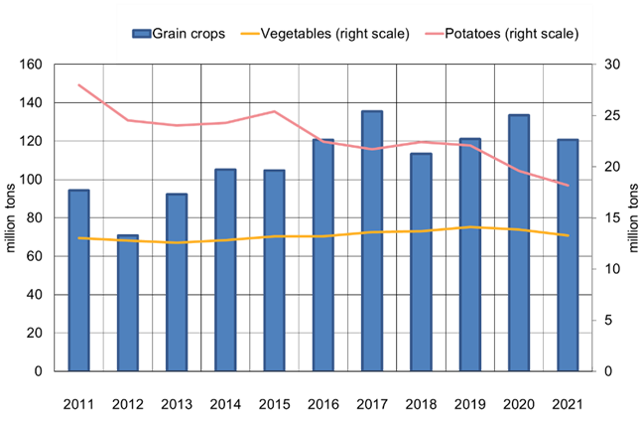