The rapid economic recovery continued in May. Even if the pace of growth slowed or remained unchanged from previous months in many branches, the pace of growth from last year’s low base was impressive. May retail sales were up by 27 % y-o-y, and growth in the service sector overall was up by 52 %. The Ministry of Economic Development estimates that GDP in May grew by 10.9 % y-o-y, putting economic output just 0.3 % below the end-2019 level. Growth has been particularly robust in the agriculture, construction and manufacturing sectors, where output already exceeds pre-pandemic levels.

Private consumption is supported by the recovery in Russia’s labour market. May unemployment fell below 5 %, only slightly above pre-pandemic levels. According to Rosstat, the average monthly wage in April was 56,614 rubles (622 euros), a 14 % increase from April 2020. Real wages rose by 7.8 % y-o-y in April. Heavy reliance on migrant labour in service industries, in particular, has resulted in labour shortages in some regions. Consumption growth has been supported by increased household borrowing and moderating savings rates. Real disposable household incomes have not recovered as fast as real wages, however. In January-March, real household incomes were still down by 3.6 % from 1Q20.

Rebounding domestic demand, climbing global commodity prices and last summer’s somewhat poor crop harvests have all affected domestic price levels. Consumer and producer prices soared in the first half of this year. June consumer price inflation continued to accelerate (6.5 % p.a., up from 6 % in May). Consumer prices of foodstuffs and construction materials have risen particularly fast. The rise in crude oil and metal prices is reflected in producer prices. Manufacturing producer prices in May were up by 26 % y-o-y, while mining industry producer prices were up almost 100 %. The government has turned to administrative decrees (BOFIT Weekly 11/2021) and monetary tightening to keep prices in check. The CBR, which has raised the key rate three times this year, has clearly indicated that further hikes are possible before the end of this year (BOFIT Weekly 25/2021). 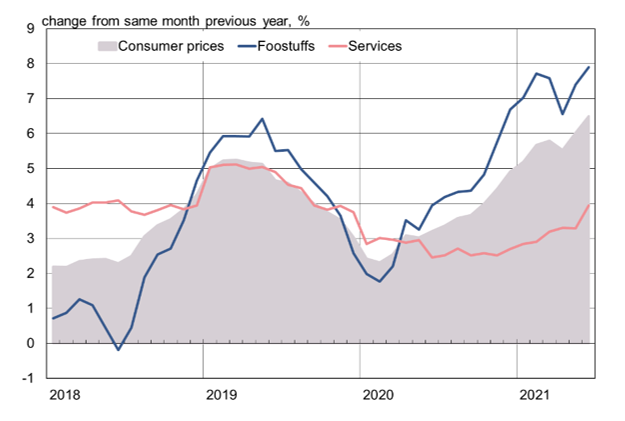