Preliminary balance-of-payments figures released by the Central Bank of Russia for the first quarter show that export earnings and imports continued to claw their ways back from the fall of last spring and summer. As in some earlier time periods, developments do not unfold from headlines because the US dollar, used by Russia in recording foreign trade, was down by about 9 % y-o-y against the euro in the first quarter of 2021. Thus, while Russian earnings on exports of goods and services were down by 4 % y-o-y in dollar terms, they were still down 12 % in euro terms. Revenues from exports of crude oil, petroleum products, pipeline gas and LNG remained rather weak, down by about 20 % y-o-y in euro terms. Other earnings from goods exports increased on year by several percent.

Russian spending on imported goods and services in the first quarter of 2021 already reached the same level as year ago in dollar terms, but were down by 8 % in euro terms. Goods imports made a healthy recovery as the value of imports was up by several percent on year even in euros. The tepid recovery in earnings on goods exports and the rise in goods imports held Russia’s usually very large goods trade surplus at an exceptionally moderate level.

Exports and imports of Russian services were still weak, particularly as nearly all travel was continuously at a standstill. Other services trade also showed modest performance. In any case, Russia’s services trade deficit shrank to lows rarely seen due to the almost complete lack of spending on Russian travel abroad. In addition, the deficit in capital income and spending remained quite small while both the income and spending have decreased. Notably, spending accruing from foreign investments into the corporate sector declined tangibly last year. Similarly, foreign investment income of Russian businesses and banks also decreased gradually last year continuing in the first quarter of this year.

Russia’s current account surplus shrank further with the 12-month moving sum falling to about 2 % of GDP in the first quarter. The notable financial account deficit continued into the first quarter of this year, i.e. the net outflow of capital from Russia was rather substantial. Some of this reflected an unusually large withdrawal of foreign investment from secondary markets for government bonds. The net capital outflow of the private sector remained relatively large. Inward foreign direct investment (excluding banks) was still small. The gradual withdrawal of foreign investments in Russian corporate bonds continued, and so did contraction of foreign debt of Russian firms. Outward corporate DI was highest since early 2019 and corporate investment in foreign bonds continued. The amount of banks’ foreign receivables increased considerably. 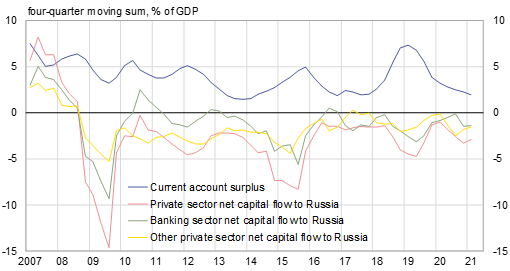