The real volume of Russian GDP shrank by slightly more than 3 % last year – less than forecast. Reduced domestic demand, and with it the contraction in output, were specifically affected by the sharp drop in prices of crude oil and Russia’s other basic commodity exports last spring, and naturally the spread of covid-19 and the accompanying restrictions to deal with the pandemic.

As in earlier economic recessions in Russia, the contraction in domestic output was limited by the fact that the reduction in demand centred more on imports, which shrank by nearly 14 last year. At the background, the ruble’s real effective (trade-weighted) exchange rate fell by 7 % from 2019 and Russian tourism abroad collapsed due to covid restrictions. The decline in goods imports was notably milder. Previous recessions and the rather weak ruble have earlier depressed imports, which were down last year about 20 % from 2012−2014 and about 15 % down from 2008.

Among demand-side categories, private consumption contracted by about 8.5 % last year, which was almost as much as in the 2015 economic recession. Before the current recession, private consumption had recovered to a level roughly on par with the 2013−2014 level. In addition, fixed investment fell by over 6 % from 2019. About 10 % less fixed investment was made last year than in 2012−2014, and 5 % less than in 2008. Public consumption, in contrast, grew by 4 %, more than in many years. The government embarked on slowing the rate of economic contraction through increased government sector budget spending. Public consumption has grown steadily and last year was about 10 % higher than in the mid-2010s. The real volume of exports contracted by 5 % in 2020. However, exports were up during earlier years to the extent that despite last year’s drop, exports were up by 20 % from about a decade ago.

On the production side of the GDP ledger, the real volume of value added fell by 25 % in Russia’s relatively small restaurant and hotels branch, but in the wholesale and retail sector was down by a mere 3 %. Mostly the drop in GDP was driven by a 10 % decline in Russia’s sizeable extractive sector (mainly due to crude oil production) as well as the transport and warehousing branches. Manufacturing growth plateaued, while the sector has been a top grower over the past five years (up 13 %). Rapid growth continued last year in the financial sector, with public administration experiencing notable growth. 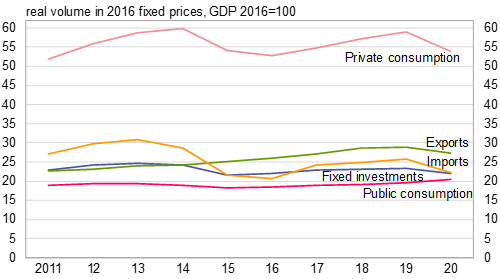