During May-July, 270 billion rubles in subsidised interest loans were granted under a new housing loan scheme that provides loans at rate of 6.5 % p.a. in accordance with a government decision. The support scheme and CBR rate cuts have lowered interest rates on all housing loans. In June, the average rate for new housing loan was 7.5 % p.a., down from 10.3 % a year earlier. The average interest rate on loans granted for the purchase of new apartments using an escrow account fell below 6 %. The use of escrow accounts in housing financing is gradually increasing in Russia, and at present just over a third of apartments under construction are sold through escrow account arrangements.

The average length of housing loans granted in June was 18 years with an average size of 2.3 million rubles (28,000 euros). Annual growth in the stock of housing loans declined to under 14 % y-o-y in June. A year ago, the annual growth in housing loans was 22 %. The growth of the housing loan stock has been sustained by increased borrowing and active use of deferred principal payments and other loan restructuring arrangements offered during the pandemic. 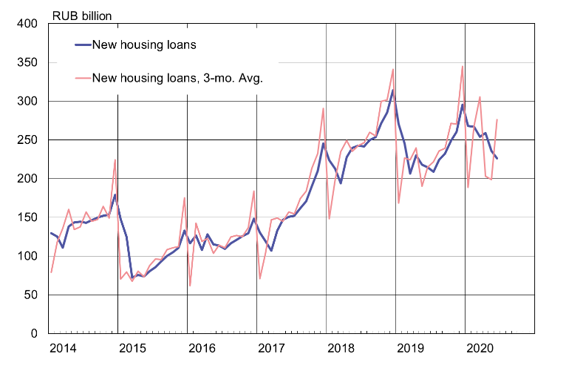