On June 19, the Central Bank of Russia lowered its key rate by a full percentage point, dropping it to 4.5 %. The CBR executive board based its decision to cut heavily, among others, on factors that have slowed down the inflation rate more than expected.

The CBR noted in particular that restrictions to deal with the COVID-19 pandemic in both Russia and abroad had lasted longer than initially expected, and thus also prolonged their negative impacts on demand and economic activity in general. Risks to Russia’s financial stability stemming from the situation in international financial markets have diminished and inflation expectations among households and businesses have abated. In the CBR’s view, uncertainties relating to the pandemic and the economic impacts from restrictive measures as well as the unwinding of restrictions and national economic recoveries mostly create downward inflation risks.

At the same time, the impact of inflation-supporting factors such as the sharp decline in the ruble’s exchange rate in March and a short-lived spike in domestic demand have already been absorbed. Moreover, the ruble's exchange rate strengthened in May and June with the stabilisation of international financial markets and higher oil prices. Nevertheless, the CBR noted that inflation could be supported by disruptions in logistics chains due to corona restrictions, the added costs of protecting workers and consumers, as well as possible volatile episodes in international financial markets.

The on-year increase in consumer prices was 3.1 % as of mid-June. The central bank expects inflation to pick up slightly this year. By lowering the key rate, the CBR aims at reducing the risk that inflation could this year fall even significantly below its inflation target of 4 %. As in the case of several previous key rate cuts, the CBR stated that it would rather soon consider whether further cuts in the key interest rate were appropriate. 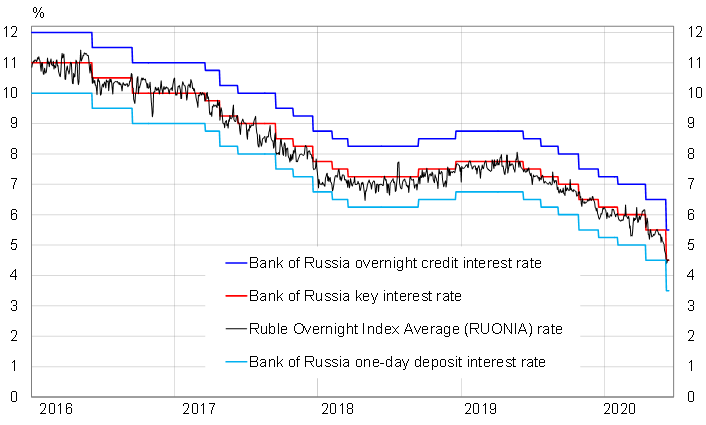