In many industries, on-year production continued to decline significantly. The nadir of the corona crisis, however, seems to have been reached in April. Most sector output showed slight (seasonally adjusted) increases in May from April.

The service sector, in particular, continued to suffer from the effects of Russia’s coronavirus lockdown. Even if Russia began to gradually relax restrictions to prevent spread of the virus in May, retail sales were still down by 19 % y-o-y. Industrial output continued to decline, down by 10 % y-o-y in May. Much of the fall in output reflects drops in oil & gas production. Russian crude oil production was down by almost 15 % y-o-y in May after the new OPEC+ production ceiling agreement entered into force at the beginning of the month. Construction activity was down by 3 % y-o-y.

Unemployment also continued to rise in May. At the end of the month, Russia had 4.5 million unemployed persons, about 6 % of the labour force. During April-May, the number of unemployed grew by about a million persons. Wages have also started to decline. Real wages in April were down by 2 % y-o-y.

Russia’s economy ministry estimates that Russian GDP contracted by about 11 % y-o-y in April-May. Forward-looking indicators suggest that the economy bounced back somewhat in June.

Industrial output and retail sales were still weak in May 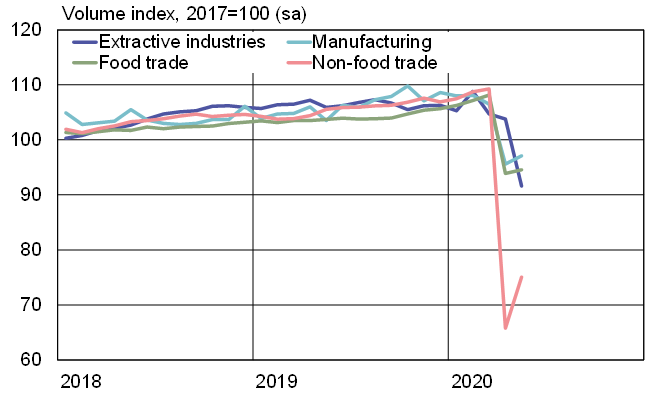