Observers have long recognised that officials in China’s regions are motivated to embellish statistical reporting as hitting numerical targets is important for career advancement. The fact that so much target-missing appears in the latest figures reflects both the current economic struggles of regions and pressure from the central government to report more realistic figures. Several provinces have experienced major data-falsification scandals in recent years.

Recent revisions to regional GDP numbers, reflecting the findings of the economic census conducted at the beginning of 2019, provide a picture of extensive problems with provincial statistical reporting. Based on the survey data, the NBS revised downward total 2018 provincial GDP by over 1 trillion yuan (140 billion euros). The revised aggregate provincial GDP figure is now lower than the national GDP figure.

The biggest monetary adjustment was for Shandong province, which saw its GDP reduced by nearly 1 trillion yuan. In relation to the size of regional economy, however, the size of the Tianjin economy was reduced the most (a 30 % cut). Several provinces saw upward adjustments of their 2018 GDP numbers. The largest correction in percentage terms was 17 % boost in GDP figures for Yunnan province.

Substantial reduction in the size of many provincial economies means that their debt-to-GDP ratios clearly exceed previous estimates. Although the actual amounts of provincial debt exposure are vague, many regions, including Tianjin and Jilin, are known for high indebtedness. The tough situation facing provinces has not been helped by the central government’s decision last year to cut taxes while increasing expenditures to provide economic stimulus.

China’s central leadership has adopted policies in recent years that have put provincial policymakers between a rock and a hard place. The top leadership has called for deleveraging while stubbornly pushing hard growth targets only achievable through increased debt. Regions currently have the thankless task of balancing between ramping up production and containment of the spread of the coronavirus. 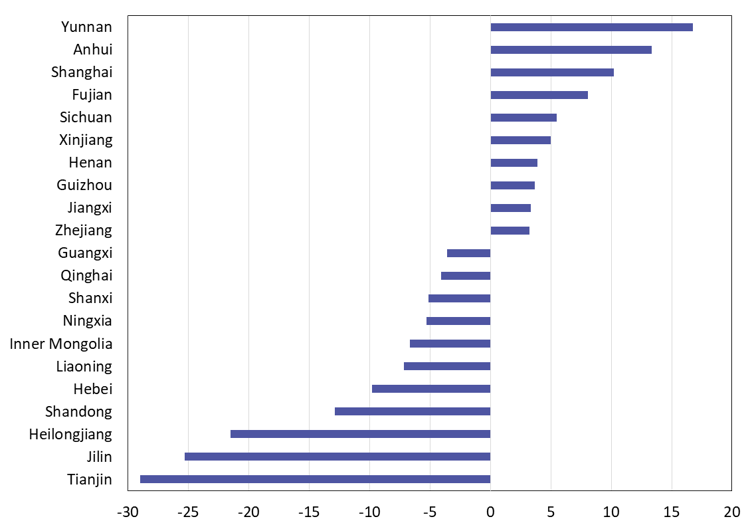