On Monday (Feb. 17), the People’s Bank of China issued commercial banks 200 billion yuan (29 billion dollars) in one-year medium-term lending facility (MLF) credits. The credit was provided at a rate of 3.15 %, a 10-basis-point reduction. The one-year loan prime rate (LPR), the new reference for bank lending, was also cut 10 basis points in February to 4.05 %.

A total of 500 billion yuan in MLF loans have been granted this year. In addition, PBoC has granted 241 billion yuan in targeted financing (TMLF), a lending facility introduced at the beginning of 2019 and intended for lending to small businesses. The value of TMLF loans maturing in January amounted to 258 billion yuan. Market liquidity this year has been increased via MLF and TMLF by a total of 483 billion yuan (69 billion dollars).

The PBoC also used open market operations to boost liquidity when the financial markets opened after the extended Lunar New Year holiday. On February 3 and 4, net liquidity was increased through 7- and 14-day reverse repo contracts by a total of 1.35 trillion yuan. They also included a 10-basis-point reduction in the interest rate (e.g. the rate on the 7-day reverse repo was 2.4 %). Since then, more reverse repo contracts have matured than have been issued. So far this year, the net liquidity impact of the PBoC’s open market operations has been -300 billion yuan. Interbank market liquidity has been sufficient, however, and the situation remains calm according to the PBoC. Interest rates on the interbank market have fallen.

In order to alleviate the short-term effects of the coronavirus epidemic, the PBoC has allocated 300 billion yuan (43 billion dollars) in “special central bank lending.” The funds will go to designated national and regional banks that will use them to fund measures for dealing with the epidemic in the worst-affected areas. Central and local governments have compiled a list of key companies, involved in the production and distribution of medical equipment and daily necessities, that the money should be lent. Commercial banks are required to grant the loans at rates at least 100 basis points below the LPR, and preferably more. The finance ministry will compensate companies for half the interest costs of these loans, which means that the interest rate paid by the companies would be below 1.6 %.

The markets were expecting an across-the-board monetary easing, including cuts in bank reserve requirements. However, the African swine fever virus that has driven pork prices through the roof has cause inflation to flare and thus limits the chance of a broad monetary policy easing. Consumer prices in January were up 5.4 % y-o-y (core inflation, which does not include food and energy prices, was 1.5 %). The coronavirus epidemic could raise food prices further as transport restrictions have hampered distribution. Monetary easing at this point could also lead to hard-to-manage capital outflows and a deteriorating exchange rate (although there are no signs of extensive capital flight at the moment). The yuan’s exchange rate fell by over 1 % against the dollar at the market open on February 3, but has since remained stable at around 7 yuan to the dollar. The value China’s gold and currency reserves increased in January by 11 billion dollars to 3.234 trillion dollars.

Interest rates have fallen on China’s money and credit markets 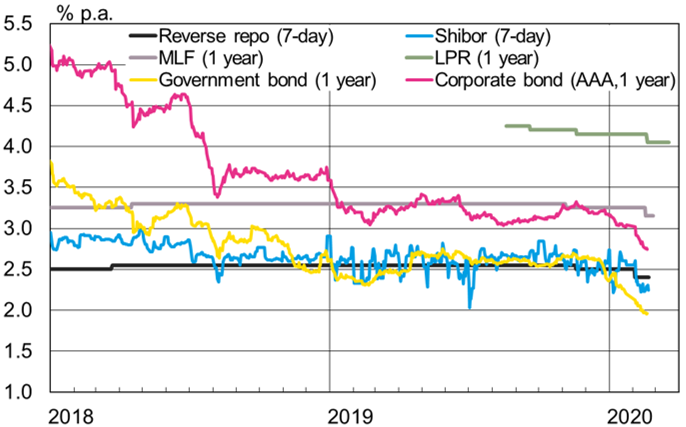