Reports by Russia’s Accounts Chamber (AC) consider optimistic the economy ministry’s forecast that provides the foundation for estimates of revenues streaming to the federal budget and other government sector budgets in 2020−2022. The AC reports call for further grounds for the forecast that GDP growth will accelerate to over 3 % p.a. in 2021 and onwards. The AC gives a view that if the projected weakening cycle in Russia’s foreign trade materialises, the risk would increase that GDP would grow from 2021 onwards at a pace near potential growth, which experts put at 1.5−2 % a year. This likely refers to the forecast’s cautious oil price assumption (about 56 dollars per barrel of Urals-grade crude). The AC also notes that the ministry’s forecast for GDP growth and many of its components align closely with the goals set forth in president Putin’s inaugural decrees (May decrees), including forecasts of a growing population due to rising immigration, rather good increases in real disposable household incomes, acceleration of fixed investment growth to very high numbers and quite brisk increases in the volume of non-energy exports. The AC points out that the cohort of 15−64-year-olds will shrink, while the gradual increase in the retirement age will keep more people in the workforce. In contrast, the reports note that especially the ministry’s projection of rapid growth in fixed investment is surrounded by questions which mean risks of not reaching the projected economic growth tempo.

The economy ministry’s forecast and government budget estimates for 2020−2022 are practically unchanged from autumn. The finance ministry estimates that ruble-denominated nominal revenues to the consolidated budget (federal, regional, and municipal budgets, as well as state social funds) increased by 4−5 % in 2019 and a similar growth pace should continue in the next few years (the economy ministry’s annual inflation forecast is 3 % for 2020 and 4 % for 2021 and 2022). Budget revenues from sources other than oil & gas taxes, however, depend on economic growth. In 2019, these non-oil revenues amounted to roughly 80 % of total consolidated budget revenues. They will provide all budget revenue growth in the next few years in the budget estimates as long as the calculations hold about weak developments in oil & gas tax revenues, based e.g. on the oil price assumption noted above. Non-oil budget revenues are projected to rise at about 6 % a year.

Consolidated budget expenditure is estimated to increase by about 6 % a year. If budget revenues are lower than projected, spending can still be maintained with funding from federal government borrowing, withdrawals from the reserve fund and the treasury’s stock of cash that has become substantial. The assets in the reserve fund, i.e. the National Welfare Fund, are expected to continue to increase, and at end-2020 they are expected to equal 10 % of GDP in total with the fund’s liquid assets at about 8.5 % of GDP. The finance ministry’s estimate does not specify anything about the extent to which the National Welfare Fund would e.g. lend to investment projects as discussions are still ongoing. Federal domestic net borrowing is expected to come in at under 1.5 % of GDP and the issuance of new bonds just over 2 % of GDP. Federal debt rises to just over 15 % of GDP by the end of 2020.

On the other hand, government budget spending is dependent on budget revenue because the federal budget is subject to a legislated fiscal rule that sets a limit on the deficit, and regional governments and state social funds have limited possibilities to borrow and are significantly reliant on transfers from the federal budget. With the projected revenues and spending, the surpluses of the federal budget and the consolidated budget would not be very large in 2020−2022 (on average about 0.5 % of GDP). Slower-than-projected growth of GDP and budget revenues together with the estimated budget expenditures would lead in the next few years towards the moderate limit on the deficit that the budget rule allows, although if really needed, relaxation of the limit that was made in 2018 is possible to repeat.

The finance ministry's assessment of the consolidated budget’s expenditure structure remains essentially unchanged. If budget spending estimates would have to be cut at some point, the pressure would not spread evenly across budget spending categories. The share of spending on social support in total consolidated budget spending falls, due e.g. to the gradual increase in the retirement age, but it would still be about a third in 2022. Social support spending could be difficult to cut as the state’s leaders since summer 2018 have repeatedly promised that the average old-age pension for non-working pensioners will rise in coming years by over 6 % a year. This is confirmed in the approved State Pension Fund budget for 2020−2022. Federal, regional and municipal workers have been promised a general adjustment to wages in line with projected inflation over all three years.

If pressures to cut spending really arose, decisions would have to be made on how much budget funding might be shaved e.g. from homeland security and law enforcement, public administration and healthcare (each up 10−11 % a year during 2019 and 2020). The planned increases in education spending have already been set to a pace of just about 2 % above inflation, while defence spending growth is scheduled just a bit above inflation. The finance ministry expects that a lull in 2020 spending growth for various sectors of the economy will turn to increases in 2021.

Nominal revenues and expenditures of Russian consolidated budget, 2012−2018 and 2019–2022 projection 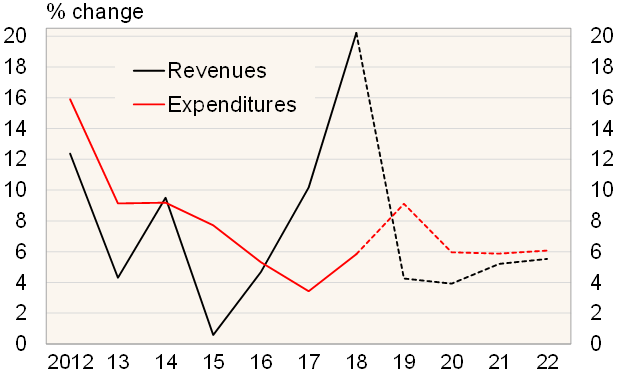