China’s National Bureau of Statistics reports industrial output growth rose from 4.7 % y-o-y in October to 6.2 % in November. The improved readings in the manufacturing purchasing manager indices affirmed the recovery. Passenger car production was slightly positive for the first time since June 2018. The readings of the services purchasing manager indices also suggested that conditions in November had improved from the previous month. The demand-side indicators, however, showed no corresponding strengthening in November.

While the purchasing manager indices suggest improvement in the service sector, there has been no sign of stronger growth in retail sales. Real growth in retail sales was 4.9 % in November (unchanged from October). Passenger car sales were down by more than 5 % y-o-y. November investment demand was unchanged from October. Estimates based on official figures show real on-year fixed investment growth in January-November was 2–3 %. Growth in electricity production and consumption has been below 5 % in recent months.

Accelerating inflation, which erodes household purchasing power, was a big contributor to the slowdown in retail sales. November consumer price inflation picked up from 3.8 % in October to 4.5 % in November as reduced pork supplies caused meat prices to soar. Producer prices, on the other hand, have been declining for five months. 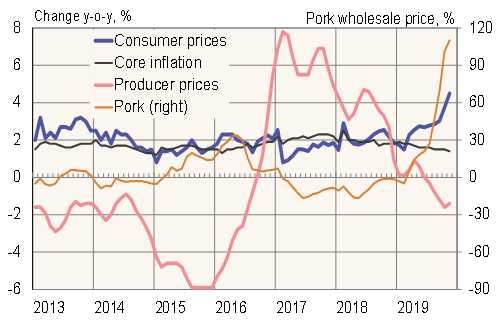