The real volume of fixed investment in the third quarter of this year was up only 0.8 % y-o-y. Growth in the first half was even a little lower, just 0.6 %. After a sharp drop in fixed investment in 2015, it recovered rather well in 2017−2018. However, this year’s slow recovery means that fixed investment for the entire year will still remain a couple of per cent below the 2012−2013 level.

As in previous years, behind the average number of change in fixed investment there are large disparities in investment developments at the sectoral level. For those sectors where the investment of large and mid-sized firms is sizeable and thereby has a significant impact on the general track of fixed investment, three branches emerge as the biggest areas of growth this year. First, investment growth in natural gas production this year has well surpassed even last year’s sharp increase. Second, after a substantial decline last year, investment in oil refining has risen fast. Third, following strong growth in 2018, the pace of investment in telecommunications has only accelerated this year.

On the other hand, after fairly tame growth in recent years, investment in the electricity sector has dropped steeply this year. After two stronger years of investment, a similar sharp decline in pipeline investment has also occurred.

This year has not been promising from the standpoint of diversification of Russia’s production base. After recovering nicely in 2017−2018 from a very sharp drop in 2015−2016, fixed investment in manufacturing other than oil refining has grown just very slightly this year. 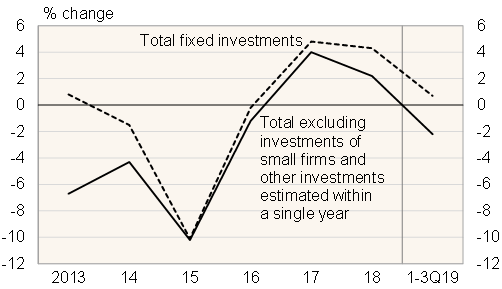