The dollar value of China’s goods exports in the first eleven months of this year was unchanged from the same period last year (but down 1 % y-o-y for November). The value of imports fell in January-November by 5 % y-o-y, but there was no change in November from a year earlier. The trade surplus for the first eleven months of this year rose to nearly 380 billion dollars, up by over 80 billion dollars from a year earlier.

Demand in China’s main export markets have weakened over the past year. Exports to the EU and South Korea were still growing in the first half of this year, but in the past three months they have gone flat and the decline in exports to the US and Japan has become steeper. In contrast, exports to the ten-country ASEAN market have grown rapidly. In November, the value of Chinese exports to the ASEAN region were as large as exports to the EU or the US. Strong export growth to countries such as Vietnam are believed to be partly related to the trade war and companies’ efforts to circumvent US punitive tariffs. Export weakness affects a broad swath of China’s main export products. 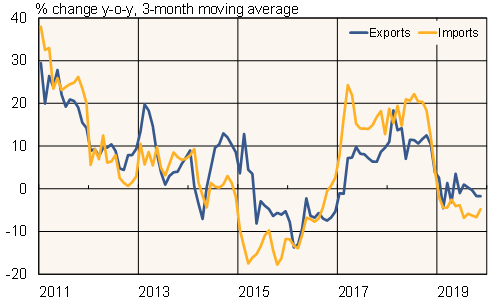