China’s National Bureau of Statistics reports that real growth in retail sales in October was just 4.9 % y-o-y, down from 6.4 % in the first nine months of this year. Industrial output growth slowed from 5.6 % in January-September to 4.7 % in October.

Slow car sales continued to drag down growth in retail sales in October. The value of online sales of goods and services was up by over 16 % y-o-y in the January-October period. Nominal growth, however, slowed considerably from 26 % in January-October 2018.

Mobile phone sales have been on a long downward trajectory in China, dropping to just 323 million units sold domestically in the first ten months of this year, a decline of 6 % y-o-y. The number of new phone sales peaked in 2013, when 478 million phones were sold in the same period. Chinese makes accounted for 91 % of new phone sales this year.

Nominal growth in fixed asset investment (FAI) in the first ten months of this year was just over 5 %, so estimated real growth was just over 2 %. Investment of government and government-owned enterprises rose by over 7 % in nominal terms, while private investment growth remained at 4 %. Thus, the situation has reversed from last year, when private firms still drove investment growth. Nominal growth of infrastructure investment in January-October was only around 4 %. Growth in real estate investment, on the other hand, continued to rise at over 10 % y-o-y. Measured in terms of floorspace, new construction starts in the first ten months of this year were up 10 % y-o-y. Real estate sales, measured by floorspace, were unchanged from a year ago. 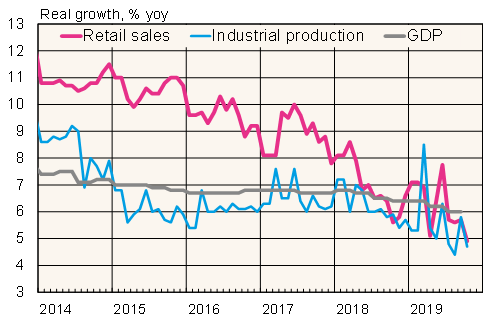