Chinese consumer prices in September rose by 3.0 % y-o-y, up from 2.8 % in August. The acceleration in inflation was driven by a nearly 70 % jump in pork prices from September 2018. Core inflation, which excludes food and energy prices, remained at 1.5 % as in previous months.

Even if inflation has yet to exceed the government’s target ceiling of “about” 3 %, soaring pork prices are a major headache for decision-makers. Just over a year ago, China suffered an outbreak of African swine fever virus that spread more quickly than elsewhere due, at least partly, to systemic and policy errors on China’s part. Pork is a key component of the traditional Chinese diet. To make up for the shortfall, imports have climbed 70­–110 % in recent months. The impacts have been far reaching, with pork prices spiking in Europe and elsewhere. Despite increased imports, the rise in pork prices in China continues. On Friday (Oct. 18), wholesale pork prices were up 24 % from the end of September. 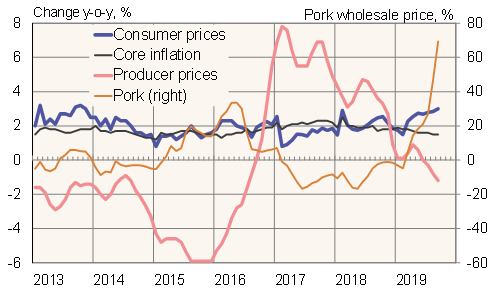