Preliminary balance-of-payments figures from the Central Bank of Russia show that the value of Russian imports of goods and services in dollars rose in the third quarter by 4 % y-o-y. In the first half of this year, the value of imports still contracted slightly. The value of exports of goods and services shrank slightly in the third quarter by 7 % y-o-y on lower oil prices. This caused the current account surplus to contract on-year in the same period. The total current account surplus for the latest four-quarter period was 96 billion dollars (nearly 6 % of GDP).

The net flow of private sector capital turned slightly negative in the third quarter, amounting to just 1.4 billion dollars. Most capital outflows came from the banking sector as Russian banks e.g. further trimmed their foreign debt. For the rest of the private sector, the net flow of capital was positive, supported in part by inward FDI flows. The net outflow of private sector capital in January-September amounted to 25 billion dollars declining to some extent from the same period in 2018. 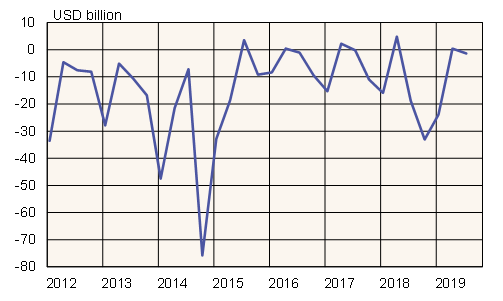