The financial account (excluding foreign currency reserves) in January-June showed a 45-billion-dollar surplus, down from the 1H18 surplus of 129 billion dollars. However, the “net errors and omissions term” implied an overall net capital outflow from China. Revised first-half figures for the current account were lowered slightly to 88 billion dollars (BOFIT Weekly 35/2019).

Two-thirds of the statistically recorded capital flows in 1H19 consisted of foreign direct investment. The net flow, however, was rather small as the flows of FDI into China recorded in the balance of payments contracted and the outward flow from China remained at last year’s level. Portfolio investment in China was down considerably from 1H18, while portfolio investment flows out of China were unchanged.

Unlike the recorded flows in the financial account, the net errors and omissions term provides a ball-park figure for unrecorded forex flows. It suggests that the net capital outflow from China accelerated this year. The errors and omissions term for 1H19 suggests that 131 billion dollars in capital outflows circumvented official scrutiny (50 billion dollars in 1H18).

Using China’s balance-of-payments methodology, foreign currency and gold reserves rose by 2 billion dollars in the first half (changes in valuations raised the final figure for China’s reserves). The value of China’s reserves slipped a bit in the third quarter, standing at 3.092 trillion dollars as of end-September. 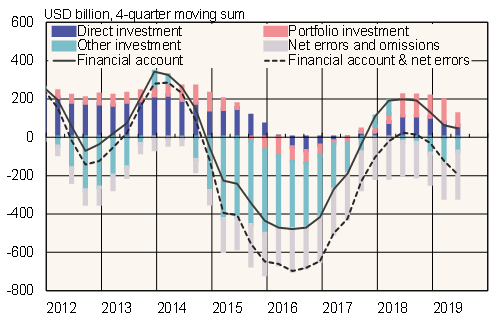