The acceleration of Russian economic growth to 2.3 % last year was largely driven by transient factors. Growth was expected to subside to a lower level this year. Rosstat’s first-round estimate of growth in the first half of this year (0.7 %) suggests the slowdown has been more rapid than expected.

Rosstat’s just-released figures for the second quarter show growth in private consumption remained fairly brisk, while the performance in exports was exceptionally weak. Following episodes of very strong growth in export volumes since 2016 and a plateauing of growth towards the end of 2018, the volume in exports contracted in the first half of 2019. While a lower rate of export growth was largely expected, the actual declines in volumes in many core export industries came as a surprise. Part of the decline in export volumes can be attributed to last year’s poor grain harvest compared to 2017, the agreement among OPEC+ countries to limit crude oil production and the contamination and interruption in operations of the Druzhba pipeline (one of Russian’s main oil export pipelines) last spring. Underpinning these developments are slowing global economic growth and a bleaker outlook for global growth.

Fixed investment growth is also expected to remain very modest this year. In the first half of 2019, the volume of fixed investment was smaller than in the same period in 2018. Growth in government-sector spending may slightly raise the economy’s growth rate in the second half, but overall the GDP growth is expected to stay at around 1 % this year. 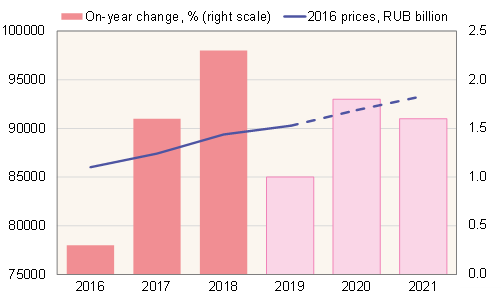