The ruble’s exchange rate and oil prices strengthened in the early part of 2019. While both have been on a downward track in recent months, the ruble-dollar rate is still up 6 % from the start of the year and the dollar price of Urals oil up by 23 %.

As in previous years, developments in the ruble’s exchange rate has occasionally diverged from the oil price. The price of Urals crude in dollars around the end of May was up by slightly over 40 % since the start of the year, while the ruble was up only about 7 % against the dollar. Despite the large drop in oil prices in June on market concerns about slowing global growth, the ruble held its value. It only dropped to its current level (around 65 rubles to the dollar) in early August on the US announcement of more sanctions against Russia. The price of a barrel of Urals crude also dropped slightly when the sanctions were announced, but has now recovered to its late July level of around 63 dollars a barrel.

Foreign investors supported the ruble’s exchange rate in the first five months of this year by increasing their share of ruble-denominated treasury bonds (OFZs) from 25 % to 30 %. The government’s rather tight fiscal policies have also supported the ruble. CBR forex purchases under the finance ministry’s fiscal rule are not expected to cause much weakening of the ruble’s exchange rate as the purchases are a small part of market activity (on September 13, the dollar-ruble rate was 64.8 and the euro-ruble rate 71.7). 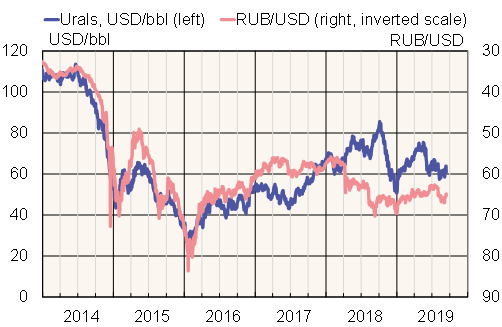