Finnish Customs reports that the value of Finnish goods exports to China increased in the second quarter by slightly over 10 % y-o-y. In the first quarter, goods exports fell by 5 % y-o-y. For the first six months of this year, China exports were up about 3 % or roughly the same increase as Finnish exports generally.

For 2Q19, the biggest export growth was seen in pulp exports (up 16 % y-o-y), certain types of machinery & equipment (up 10 %) and wood products (up 40 %). Media attention focused also on the rapid growth in meat exports to China after the granting of import licences to Finnish meat producers. The value of meat exports in the first half tripled from 1H18. Despite the rapid growth, meat and meat products only made up about 0.5 % of Finnish exports to China.

Finnish imports from China have increased steadily this year at a roughly a 4 % y-o-y rate, slightly outpacing growth in Finnish exports to China. For this reason, Finland’s trade deficit with China rose by 40 million euros in the first half to around 500 million euros.

Finland typically runs a services trade surplus with China, and last year that surplus amounted to nearly 500 million euros. 2018 services exports to China were roughly 1.4 billion euros, while goods exports were valued at 3.5 billion euros. Chinese tourism in Finland accounted for 14 % of services exports in 2017. Chinese tourism in Finland continues to enjoy strong growth. Statistics Finland reports that in the first seven months of this year, 133,000 Chinese tourists visited Finland (up 14 % y-o-y) and that they spent a total of 217,000 nights in Finnish hotels or inns (up 17 %). 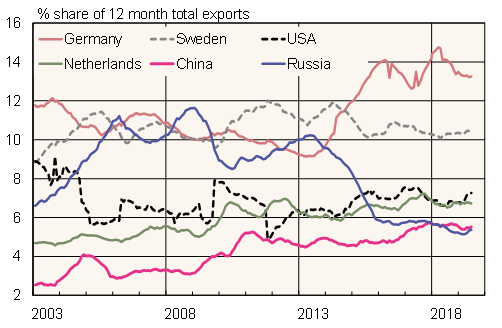